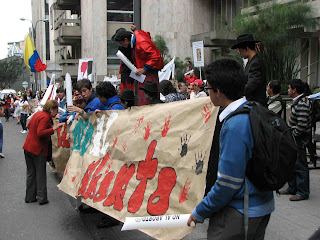 I encountered this anti-abortion protest the other day in front of the Palacio de Justicia. Nearby, was a pro-choice demonstration. See more photos here. I understand that the- procurador, who is quite conservative, is trying to roll back abortion rights - the procedure is legal in cases of rape, incest, when the woman's life is in danger or the fetus carries a severe abnormality. Also, the Supreme Court is considering whether or not to include the day-after pill in government health programs. 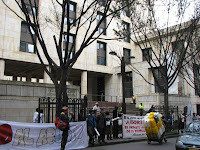 I admire people who fight for their principles, even when I disagree with them. However, in this case there's an absurdity involved. While abortion is prohibited in most cases, it's also practiced freely and almost openly in illicit clinics throughout Bogotá.

Do the anti-abortion protesters really believe that, if the law changes, abortions will stop happening - like a spell cast in a Gabriel Garcia Marquez novel? The same way that illegal drugs disappeared from Colombia when the 'personal dosis' law was reversed? Why aren't they protesting at the illicit clinics? What do they think that prohibiting all abortions would accomplish, besides driving more women and girls to take recourse to dangerous illicit clinics?

It's even arguable that prohibition actually promotes abortion. Several years ago, a friend and I did some investigative reporting by visiting several of Teusaquillo's illicit clinics, where she told the 'doctors' that she needed an abortion. They all offered abortions, of course. And when my friend asked whether the procedure was dangerous, one 'doctor' assured her: "Lots of women come here and have one abortion after another, and they have no problems." He was lying, of course. But, like any service providers, abortionists have an economic incentive to promote their services. But if the procedure were legal and regulated, abortion clinics could be required to provide family planning education as well.