Euthanasia and assisted suicide have received lots of media coverage and controversy in recent weeks, due to the death of Dr. James Kevorkian and the release of a video showing the assisted suicide of a British millionare.

But in here Colombia, one of the few places in the world where euthanasia is legal, at least one doctor has been practicing it for decades with little controversy. 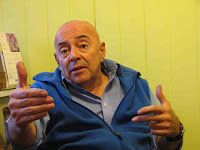 Dr. Gustavo Quintana is an enthusiastic man of 64, whom I met in his small office in a nondestript building on Seventh Ave., above a hair salon and next door to an indoor rock climbing gym.


Quintana might not fit the image of someone who some critics call 'Dr. Death.' Rather, at 64, after two heart attacks, he's full of life, energetic and enthusiastic; a divorced father of four who is building a relationship with his girlfriend.

Quintana unapologetically defends euthanasia, which he carries out along with his practices of general medicine and gerontology, the treatment of aging. He says he's carried out euthanasia 83 times - a procedure he considers completely compatible with the Hippocratic Oath, which instructs: 'Do no harm.'

"In order to do it, I have to love my patients," Quintana says.

Other Colombian doctors also probably perform euthanasia, Quintana believes, but they don't talk about it as he does.

Quintana's interest in euthanasia began after an auto accident which almost left him quadripelegic. He decided then that he preferred death to a limited life. His patients suffer mostly from cancer, diabetes and degenerative neuromuscular conditions, he said, but have also included a few people in their 40s, whose lives had become unbearable. One was a woman whose diabetes had destroyed her kidneys and her eyesight and was going to require the amputation of her feet. Blind and unable to walk, the woman, who lived alone, faced an impossible challenge in traveling to her regular dialysis treatments.

Quintana says his euthanasia procedure is peaceful and painless, consisting of three medications, which put the patient to sleep, sedate them and then stop the heart. They are the same medications used to apply the death penalty in the U.S., Quintana said - ironic in Colombia, where the death penalty does not exist. The process lasts 10 to 15 minutes, he said.


Altho Quintana has not faced criticism from religious leaders, being known as a euthanologist has brought him troubles. One time, he was denied a visa to England, because, he says, of his euthanasia practice. Another time he says the FARC guerrillas lured him into their territory with a false call for medical assistance and then held him there for several days before releasing him. He believes that a sick guerrilla leader had wanted to be euthanized, but the man died before Quintana arrived. (If the doctor's speculation is accurate, it's not much of an endorsement of the guerrillas' courage in the face of the same death they routinely dish out to soldiers and civilians.)

And in a university conference, someone once compared Quintana to a hired assassin.

Quintana says: "I told them 'an assassin is someone who kills a person who wants to live.'"

To this blogger, legalizing euthanasia is pretty close to a no-brainer. If you or I encounter someone lying on the sidewalk suffering terribly we've got a moral obligation to help relieve their pain. Why should it be any different for a doctor whose patient is suffering from a terminal illness? Add to that the tremendous financial burdens on the patient's family and society, and the moral obligation to offer euthanasia seems overwhelming.

But the great majority of societies prohibit both active euthanasia and assisted suicide (altho you can be sure that they're often practiced secretly). In contrast, other polemical practices, including prostitution, abortion and same-sex marriage, have been legalized in many countries.

"It's because we're very uncomfortable dealing with death," Quintana says.

To me, the moralists' arguments are self-contradictory. If the religious argument that 'God provides life, so only God can take it away,' is to be accepted, then why aren't the moralists also fighting to ban smoking, air polllution, drunk driving, rock climbing and the many other ways we humans cut short our own lives. And, why do conservative Bible thumpers, at least in the U.S., generally support capital punishment?

And following their reasoning about God's intentions to its logical opposition, believers should also oppose medical treatment, since it evidently interfere's with God's intention that the person suffer and perhaps die.

But some of Dr. Quintana's reasoning also leaves me uncomfortable. Faced, for example, with the hypothetical case of a young, depressed person who came to him seeking euthanasia, Quintana says he would consider it.

Quintana says he's persuaded some patients bent on being euthanized to delay. But what right, he asks, does he have to question a patient's motives?

But depression is increasingly treatable, and I've heard of many cases of people who tried to commit suicide, failed, regretted trying and went on to live full lives.

"How can I convince a person who wants to die of my desire to live?" he asks.

To me, Quintana's non-judgementalness also creates potential for a slippery slope, especially when he talks about "every person's right to decide to what point to accept their own decadence." But our athletic skills peak in our twenties and we spend the rest of our lives in some sort of decadence.

Despite being highly Catholic and generally conservative, Colombia is one of the few nations to permit active euthanasia thanks to its progressive 1991 Constitution, which changed Colombia from a Catholic to a secular nation. In 1997, the Constitutional Court ruled that euthanasia did not violate the Constitution's clause endorsing a right to life. The court also called on Congress to regulate the practice of euthanasia, something which has never been done.

To protect the right to euthanasia in Colombia, I think the practice should be regulated, requiring, say, the agreement of two doctors and a psychiatrist that the person is terminally ill and has only a short time left to live and made an independent choice to die. Otherwise, a single highly-publicized case in which children fighting over an inheritance accuse each other of encouraging grandmother to have herself killed could motivate Colombia's Congress to outlaw the practice.

Colombian law also does not restrict the practicing of euthanasia to Colombian citizens or residents. Quintana says he's never had a foreign euthanasia patient, but that one time an American nurse proposed flying down planeloads of terminally ill North Americans to undergo euthanasia here. She'd charge each of them thousands of dollars and divide it with Quintana. Quintana didn't want to commercialize his work and so rejected the offer. But other doctors might not have the same scruples. And, while it could be a blessing for many suffering foreigners, such an scheme would most likely bring about a total euthanasia ban in Colombia.

For his part, Quintana plans to continue unapologetically performing euthanasia as long as he's able. And when his own time approaches, he plans to have his own euthanasia filmed for posterity.

After that, will some other courageous doctor take up his mission?

The Foundation for the Right to Die With Dignity.

Hi!
Can you tell me if there is anywhere in Colombia possible to buy Nembutal or equivalent drug without the prescription!?Thank you! Jan