Jose the Rapper of La Jimenez

I suspect that most people think Jose's crazy; I sure did. After all, there he is along Jimenez Ave. with his crazy hair, grinning and rapping while everybody else is doing constructive things. 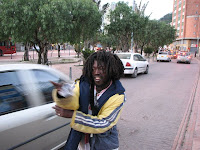 Sure, Jose's crazy: crazy as it takes to earn his living doing something innovative and different, which he loves.

Many afternoons I see him there on the side of Jimenez Ave., near the expensive and conservative Los Andes University, rapping away by the entrance to a parking lot. He swings his arms about. He swivels his body. He raps about passing bicyclist, about his own history, about his pride in his Afro-Colombian heritage, about the weather, about anything. He grins. He waves. He's having fun.

'I'm a black guy from el Chocó. I'm here in the city to tell you the truth.'

Students and office workers walk by. Most barely glance at Jose, who, after all, is crazy. But a few pause to greet him or give him a coin. Jose raps on. 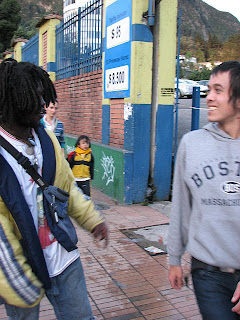 'I'm singing about people agonizing. Sending my greetings to the whole world.'

Some of Jose's raps are social, talking about oppression, racism, poverty and struggle. Or he raps on whatever he sees: a dog runs past, a cyclist passes, it's raining....He's been rapping about three years. He moved to Bogotá about eight years ago from El Chocó, a poor, mostly Afro-Colombian region near Colombia's Pacific Coast. The region's residents often get caught in the middle of territorial battles between guerrillas, paramilitary groups and plain-old drug cartels which battle over cocaine smuggling routes to the coast. 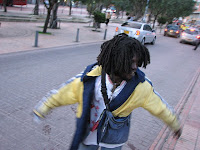 Jose said that back home he worked in gold mining. He loved mining, he said, but was driven away by violence which he didn't detail. Much of the gold mining is controlled by outlaw groups, making miners vulnerable to all sorts of violence. In Bogotá, Jose's world has changed completely. Here he's breathing car fumes, but back in the gold mines he was probably exposed to even more poisonous substances, like arsenic and mercury.

In the evening, La Jimenez is a long traffic jam. Cars honk, drivers stew and inch forward almost against the bumper of the car ahead, as tho that would get them home any sooner. Jose dances out among the shiny machines and halts the traffic so that another can pull out of the lot into the traffic jam. He's still rapping. A window slides down and a pink hand gives Jose a coin or candies or something and then the window slides back up, sealing its occupant off from the world. Jose raps back onto the sidewalk, swinging his arms enthusiastically. Behind him, the cars wait in the traffic jam. Jose earns 10,000 to 15,000 pesos a day. He sometimes also scavenges stuff from the trash and sells it. It's enough to pay for a tiny room near the city's red light district.

"I'll do anything to earn money," he says, "except steal. I'm an honest guy."

Then he raps away.

What are those very sane people who work so hard to buy their shiny cars, who earn millions of pesos per month and sit trapped in those cars, thinking about this guy with the crazy hair rapping to the world?


The Armless Weaver of La Septima
The Box Man of La Jimenez.

I love this! Very nice portrait of a creative individual living in Bogotá. Thank's for seeing the beauty of ths man's life, and for sharing.