Awaiting the Keys to Peace

Since Monday of this week, artist Antonio Castañeda has been camped in Bogotá's National Park, by the monument to General Rafael Uribe Uribe, who led the Liberal Party's side during the Thousand Day's War.

Castañeda's art exhibition is meant to promote peace, on both the local and international levels. And he holds a faith in governments and institutions which is either heartening or naive. He's chained himself to a tree, with five locks, and sent the keys to five different important people: the German Ambassador, the Papal Nuncio, a journalist, a government minister and the head of a charity - not all institutions which have always promoted peace.

At 2 p.m. Friday he expects the five to show up to unlock him, freeing him to campaign for peace.

And if they don't show up?

With that sort of faith, maybe he really can also hold out for world peace.

Castañeda grew up poor in a violent neighborhood in the city of Boyaca. There, he said, he became inspired to work for peace. And, now he said, he wants to plant his seed. He hopes someday to get the money to take his exhibition around the world.

And why is he now before the monument to a general who fought in one of the bloodiest of Colombia's many civil wars?

"Uribe Uribe was a palladin for the poor," Castañeda explains. 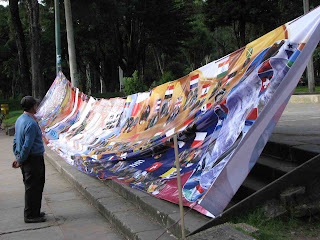 I ran into Antonio today in La Plaza del Periodista. The guy was sad, because the police had removed him and his art from the park. Apparently, he didn't have a permit. He had also felt threatened - he said the police damaged his artworks, drove him thru the hills and later held him for a while in the police station.
The polics also cut his chains for him.