Let's get this all straight: Bogotá has terrible traffic congestion, worsened by the behind-schedule Transmilenio expansion work which has sections of two main avenues shut down.

And, at the end of July and August, Colombia is to host the under-20 World Cup, its biggest-ever sporting event, and the country wants desperately to pull off a succesful show.

Despite all of this, at least some Bogotá officials wanted to shut down Seventh Ave. beginning this Monday, to start work on another Transmilenio line. This brilliant plan was backed by the administration of Mayor Samuel Moreno, who is now suspended from office and appears to be headed toward trial because of the scandal around the two other Transmilenio line expansions. (His brother, a senator, is already in prison.)

Fortunately, today the Institute for Urban Development (IDU) postponed the start of the work on Seventh Ave. for another three months. However, the city should push it back further and reconsider the whole deal. 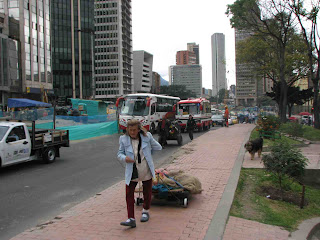 Of course, Seventh Ave, badly needs some sort of efficient mass transit to replace the chaos and pollution of Seventh Ave. However, 'Transmilenio Light' plan was invented by the same Moreno administration which apparently was as concerned with filling its officials' pockets as improving Bogotá's transit. Work on Seventh Ave. has now been postponed so many times that the construction will be left to the next mayoral administration - and the frontrunner for the job, Enrique Peñalosa, advocates instead a full-scale Transmilenio line on Seventh.

Rather than forcing the city's next mayor to carry out a project which he or she doesn't believe in and which was probably cooked up with corruption, Bogotá should hold off on the Seventh Ave. until there's a consensus and a well thought-out plan for it. That plan might be a version of Transmilenio, a subway, a light rail line, a trolley or a combination of the above. But Seventh is the city's most historic and emblematic avenue and deserves to be done right.