The Taitas of Plaza San Victorino 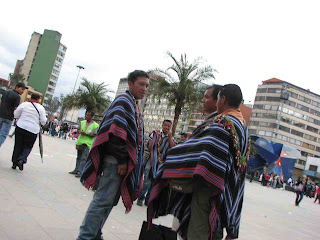 Few places in central Bogotá are as colorful and perpetually active as the Plaza San Victorino, the great shopping district, with its illegal street vendors, llamas, prostitutes and medicine men (and women).

Those traditional healers, or taitas, belonging to the Inga indigenous people who live in Putumayo Department, appear incongruous amidst the plaza's vice, commercialism and quadripeds.

But the taitas, whom you see hanging out in small groups wearing striped purple ponchos with bunches of beads around their necks. However, these taitas aren't pristine: many appear to be alcoholics, and their fortunetelling is quite commercialized. Today, I first talked to a woman taita and then a male one, who gave me a small bracelet which he dipped in yagé (a hallucinogen also known as ayahuasca) and promised would fix my troubles - for a price: 10,000 pesos. I asked him to cure my gut problems, and I'll be eternally grateful if it works. Afterwards, the first taita returned to find out how much I'd paid the second taita.

The Inga are descendants of what I believe are the only Colombian people who belonged to the Inca Empire. (I suspected that their name is a derivation of 'Inca.') They're famed for their curative powers. 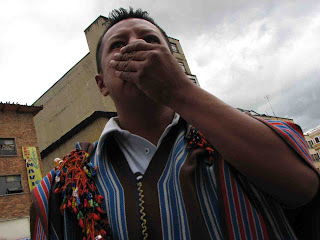 I'm glad that you like the blog. That's a great photo of San Victorino. Where did you take it from? A rooftop? Neat coloring, too. - Mike