Drug Money Down the Drain? 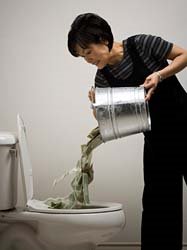 How have the billions of dollars in U.S. taxpayer money for the War on Drugs been spent?

In many cases, we aren't sure.

That's according to a report released the other day by the U.S. Senate Subcommittee on Contracting Oversight, headed by Sen. Claire McCaskill, a Democrate from Missouri. The report paints a really dismal picture of the use of U.S. taxpayers' drug money in Latin America.


Between 2005 and 2009 the U.S. spent some $3.1 billion on anti-drug efforts in Latin America, $1.9 billion of that in Colombia. Altho the report doesn't say it, it seems to me that that's a big warning sign. Drug production and trafficking are region-wide phenomenas, and Colombia is really only a recent player in cocaine production. Is it realistic to imagine that by concentrating on Colombia they could solve this problem?

(As it's turned out, Plan Colombia has decreased violence and reduced cocaine production here - but meanwhile violence has soared in Mexico and Central America and coca leaf cultivation has increased in Peru and Bolivia.)

The report doesn't describe possible wastages such as a $11,000 toilet seat or research funds blown on pizza and beer. But it describes laxity and negligence in monitoring how money was used which could open the door to such things.

That's all convenient for the contractors, including DynCorp, Lockheed Martin and Raytheon, many of them huge corporations with armies of lobbyists in Washington making sure that the government largesse keeps flowing - and probably that no undue attention's paid to how it's used.

One thing which leaps out from McCaskill's report are the number of no-bid contracts, in several cases to Native American-owned companies from Alaska. Nothing wrong with giving an advantage to underprivileged native peoples, but one has to wonder whether a company based thousands of miles away in the permafrost is really ideal to provide services here in the tropics. Or, at least, whether others shouldn't get a chance to compete.

The Alakan natives' contracts included one company, Olgoonik, which got "contracts worth nearly $37 million for meal services in Bolivia and “personnel support services” in Colombia," according to the report. Personnel support services could be anything from pizza parties to psychological counseling to jock straps. Shouldn't taxpayers know what they're getting for their money?

"From 2005 to 2009, the federal government spent approximately $840 million on contracts awarded without adequate competition," the report says.

Even tho few appeared to be paying attention to how the money was used or whether it produced results, the funds kept increasing. "From 2005 to 2009," the report says, "the federal government’s annual spending on counternarcotics contracts in Latin America rose by 32%, from $482 million in 2005 to $635.8 million in 2009." That $3.1 billion could have built lots of schools and hospitals.

Setting aside the question of whether the money was spent on coca erradication or pizza parties, the return on investment has been very mixed.

According to the U.S. Department of Justice, cocaine prices in the U.S. have increased in recent years, purity has declined and positive tests for cocaine at work have gone down. Colombia's cocaine production is also way down, while regional production declined somewhat. 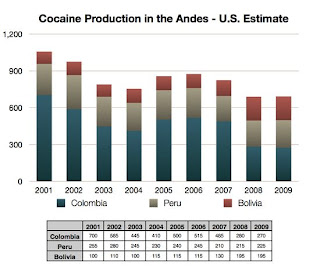 But this commentary suggests that U.S. government calculations of cocaine production are too low. And, cocaine consumption is "surging" in Europe, the United Nations says. And, if U.S. cocaine consumption is dropping, methamphetamine use appears to be booming. Perhaps reducing cocaine use only pushes abusers to try other drugs.

If the U.S. succeeded in making sure all of its drug war money got spent optimally, could it win the drug war? I suspect that it would only make a marginal difference. Erradicating all of Colombia's cocaine would likely only mean more production in Peru and Bolivia. And eliminating all of South America's coca leaf crop would likely only push the industry into Africa or Asia, where it's been grown before.

Another recent report, this one issued by a ex-leaders of various nations and the U.N., called for government to try decriminalization.


Sen. McCaskill, incidentally, has a personal interest in drug issues. Her brother has had a series of drug problems.
By Mike Ceaser, of Bogotá Bike Tours
Publicado por Miguel en 8:41 PM

Email ThisBlogThis!Share to TwitterShare to FacebookShare to Pinterest
Etiquetas: cocaine, war on drugs