The other day, French urban planner André-Marie Bourlon of the Paris Region Urban Planning and Development Agency visited Bogotá, and he came away very disappointed in the La Candelaria neighborhood, the city's historic center.
"This city stands out for the abandonment of the neighborhood," Bourlon told El Tiempo. "The neighborhood's architecture is exception, but curiously it's not valued."
Bourlon's only half right. Bogotá's historical center does have lots of architectural jewels, many of them neglected. But, Bourlon might keep in mind that Paris is the capital of a rich nation and a tourist mecca, while Bogotá is the capital of a poor nation still embroiled in an armed conflict which only recently has achieved enough stability to attract tourists and to think about things like renovating old buildings.
If Bourlon had looked closely, he'd have noticed that lots of historic buildings here have been renovated - but that many others have been neglected - and might just collapse unless they get help soon.

Bogotá has strict rules on modifications of the city's historic buildings. In some cases, however, owners have found it easier and cheaper to just let an old building collapse and then build another one, rather than renovate the historic structure.


Urban planner Bourlon also suggested making more of La Candelaria into a pedestrian district - a great idea, which would eliminate some of the stress and pollution from the car traffic. They've turned the lower part of 11th into a pedestrian street, and hopefully will continue up the street.
However, the neighborhood also contains lots of decaying buildings, particularly west of Seventh Ave. and behind the presidential palace - a neighborhood dominated by military supply shops and printing houses. 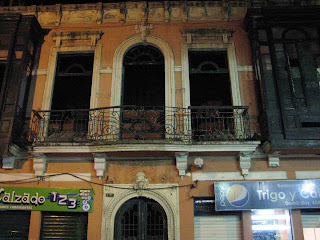 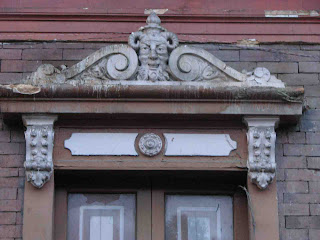