In a parking lot beside the Centro Internacional there is now a vehicle which never moves - an old trolley, which sat abandoned for many years. Its owner, Nelson, salvaged and repaired the trolley and has turned it into a cafe.

The old electric trolley, which ran on rubber wheels on the street, makes interesting historical contrast with the Transmilenio line on neighboring Ave. Caracas - whose buses move faster and have much greater capacity than trolleys, but also belch out diesel fumes - and the chaos and contamination of Seventh Ave, just one block east.

The city set up trolley lines after the 1948 bogotazo riots destroyed the old streetcars, called tranvias. Many of the buses came from communist Eastern Europe, and some may have been imported from Russia in exchange for Colombian coffee. Trolley fare was cheaper than that of gasoline-powered buses, but some criticized the trolleys as unreliable. Sometimes the pantograph, which connects the car to the electrical line, would become disconnected, obliging the driver to get out and reposition it. Other times, the electricity would be cut, halting the whole system. And the ride often wasn't smooth, and many passengers and their shopping bags got knocked around by the powerful accelerations and sudden stops.

Bogotanos apparently soured on the trolleys and during the 1980s they were scrapped in favor of 'modern' diesel buses. The last ones ran on Seventh Ave. until 1991, Nelson said. Undoubtedly, the interests of private companies who wanted to collect bus fares also influenced the decision. A visit to today's polluted and chaotic Seventh Ave. shows that bogotanos got the worst of all the options: a transit system without organization, whose buses stop unpredictably and stay stopped for much of the time, not because of lack of fuel, but because of chronic traffic jams.


Bogotá is debating what sort of transit system to put on Seventh Ave. The sitting (suspended) Mayor Samuel Rojas wants a 'light' version of the Transmilenio system. But others have proposed light rail or trolleys. Electrical-powered vehicles are less expensive to operate and require less maintenance than internal combustion vehicles and also don't pollute. Here's someone's fantastical concept for Ave. Septima. 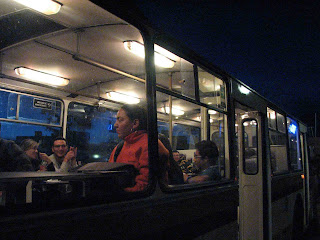 Here's a great history in English of Bogotá's trolleys.

Find lots of history and photos, in Spanish, here.

Great Blog Entry.
Many thanks for the positive news.
I hope some day to visit the Trolley cafe by myself.

Thanks for your comment. I'm sorry to have to tell you, tho, that since I did the piece the trolley cafe has disappeared. We can be optimistic and believe that it moved and is functioning somewhere else.

There is, in any case, an old tranvia or streetcar cafe in La Candelaria.

Hi, Mike:
In 2012 the Trolley Café reopened at the Autódromo de Tocancipá, far north of the city. I amended my webpage and added a picture:
http://tramz.com/co/tc/tc.html
Best regards,
Allen Morrison

Hi Allen - Thanks for the update. That's good news.