For some reason, Bogotá's traffic congestion has gotten lots worse during the past week or so - and much, much worse is to come. Not only are thousands more cars entering the city each month, but at the end of July and in August the country is to host its biggest-ever sporting event, the FIFA Under-20 World Cup, which will bring an invasion of people and vehicles. 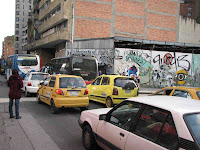 With the city already near gridlock, how will it survive the cup? The other day, Bogotá's transit secretary announced a plan, involving some new bus routes and something called 'green waves' at intersections to pas traffic thru. Those things will help only marginally. During the cup, the city should also expand its Pico y Placa policy to restrict each vehicle's driving during three days of each week instead of the present two days.

Hanging over the city is whether the new Transmilenio lines on Carrera 10 and Calle 26 (which goes to the airport) will functioning. City officials promise they will be - at least partially. But Friday's El Tiempo confirms what a glance at the muddy pit which is 26th St. at Carrera 7 shows - that section has a long way to go. The new target date for the project which was originally supposed to be done in July 2010 is this November. And the company is demanding more money.

The only measure which will really address this situation is a London-style congestion charge for the city.