Elvira and Her Horse With No Name

If you've walked up the Eje Ambiental, you might have seen horses grazing placidly, looking somewhat out of place near Universidad de los Andes, Colombia's most elite private university.

Seeing the horses and their owners amidst Colombia's future elite reminds me of the huge gap in this country between the poor and wealthy, as well as how hard some people work to get by. 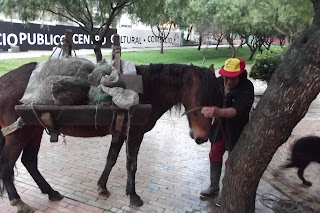 Elvira, this horse's owner, lives on the hillside above the universities. She descends with the horse, which has no name, every day she can to collect discarded food from La Candelaria's restaurants, which she feeds to the animals her family raises on the hillside. The family also has another horse, named TransMilenio. But there's little point in naming horses, said Elvira, since they don't come when called like horses.

Elvira, who is 67, said her family used to make good money raising pigs, until sanitation authorities visited about eight years ago and told them that the pigs' odors were bothering nearby students. The officials also nixed rabbits for the same reason. Now, hers and other hillside families can only keep horses, cows and chickens. 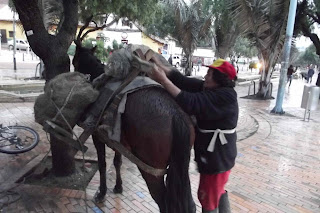 "They said the pigs stank and I don't know what else," Elvira said bitterly. "The rich do whatever they want to the poor."

There are, of course, valid reasons to control livestock raising, whether in the city or the country. Animal waste, if not properly treated, pollutes water and can cause disease. (A couple of years ago I got a horrific case of amoebas from eating lettuce grown on a hillside amongst livestock.) As I understand it, the families living on the hillsides don't have permits or own the land, but have often been there for many years. They also are poor people.

It's important to preserve the hills, but also to respect the people living there. Perhaps the city and nearby universities can work with the families to turn their land into farms demonstrating sustainable, eco-friendly agriculture. Those families can also act as informal wardens to protect the hills from illegal homebuilding, crime and arson. This would be a win-win-win for the hillside families, city and the environment.

Wonderful post Mike.
Yes, The gap between the rich and the poor in Colombia is huge and, unfortunately keeps growing.