When she was only ten years old, her father was assassinated on a Bogotá streetcorner, launching him into immortality and her onto a life suffused with Latin American leftism and a responsibility to celebrate the legacy of her father, the martyred Colombian populist Jorge Eliecer Gaitan. 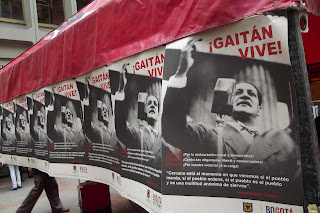 Gloria Gaitan's own life hasn't been uneventful. She has run for political office, including both mayor of Bogotá and president of Colombia - always from the left, of course - and represented Bogotá in Congress during the 1970s and as ambassador to Romania in 1982. But most dramatically she also served as advisor to Chile's socialist Pres. Salvador Allende, whom she had met in Cuba. She became more than an advisor. When Allende was overthrown by Gen. Augusto Pinochet in 1973, she had to take refuge in the Colombian Embassy and then flee the country - secretly carrying Allende's child in her womb. She lost the baby, however, and waited until 2007 to reveal the story.

Today, at 74, Gloria Gaitan remains dynamic and opinionated. I talked to her on Seventh Ave., just a few yards from the spot where her father was shot, triggering the Bogotazo riots. Gloria was helping with preparations for tomorrow's 'Day of the Victims', created to coincide with the anniversary of Gaitan's assassination. Nearby, artists were creating a huge portrait of the populist leader out of flowers.

Her father's life, tho cut short, was not in vain, she says. He had been a senator and mayor of Bogotá and was preparing to run for president when he was killed.

"The importance of my father was that he awakened the dignity of Colombia," she said. "The people understood the power that they held."

More than six decades after her father's assassination, the Communist bloc has fallen and Colombia has been governed by conservatives for four consecutive presidential terms. There's even a McDonald's beside the memorial to her father on Ave. Septima. Nevertheless, Gloria has maintains the faith that her father's ideals about the people pushing the oligarchy aside and obtaining power will be fulfilled. Gaitan's passion continues flowing thru Colombia's people, she says.

"Every Colombia knows that he's the father, the son or the brother of a Gaitanista," she says. "The people are no longer serfs."

The ongoing recession and global economic turmoil prove the truth in her father's warning about the power of banks, she says.

"In that, he was a visionary," she says. 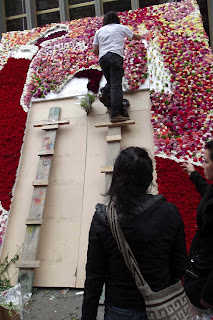 If Gloria sometimes sounds like she's reading out of a communist phrase book, perhaps it's understandable, since her story has been connected to the continent's larger-than-life leftist figures: among others, she met both Fidel Castro and Che Guevara and became Salvador Allende's lover.

Still, she doesn't talk like a doctrinaire communist, and insists that her father was not either. He believed in private enterprise and free speech, she says, as well as a form of direct democracy, but opposed the Soviet Union's concept of a 'dictatorship of the proletariat.'

The 1,000 peso bill features Jorge Eliecer Gaitán's image, as well as two of his famous phrases: 'The people are superior to their leaders,' and 'I am not a man; I am a people.'

Gloria believes the United States' Central Intelligence Agency assassinated her father. The killing continues spawning conspiracy theories, particularly because on the day he died Gaitan planned to meet with Fidel Castro, who was in Bogota for a congress of young socialist leaders. Most mainstream historians, in contrast, hold that Gaitan was shot by a mentally unbalanced man whom Gaitan had turned down for a job. But the assassin was then lynched by the crowd, and so it's still unclear whether the apparent assassin was acting alone or for a political party.

If her father had survived and been elected president, she asserts that today not only Colombia but all of Latin America would be different.

Others, however, might speculate that Gaitan's incendiary rhetoric against 'the oligarachy' could have deepened the country's political polarization.

In any case, Gaitan's assassination triggered huge riots called El Bogotazo, which burned much of the city and were followed by La Violencia - a near civil war between the two major political parties, the Liberales and the Conservadores.

While I talked with Gloria, loudspeakers played stirring sections of her father's speeches. In several, he charged that Colombia was ruled by an elite of '15 to 20 families.' Some people would say that that has changed little since. In fact, the Santos family, the historical owners of the El Tiempo newspaper, continue producing high government officials, including current Pres. Juan Manuel Santos.

But Gloria says that her father's charge about the 15 to 20 ruling families is no longer true.

But Gloria is encouraged by the frequent protests by leftist unions, students and even guerrilla activities, as well as the rise of a new generation of leftist presidents across Latin America.

Venezuelan Pres. Hugo Chavez, she says, has "rebuilt Latin America's pride, and created a unity and integration of Latin America."

I was wondering if you might put me in touch with Gloria Gaitan? I am writing a book on assassinations, and I believe I have worked out how Roa Sierra was used. I can be reached through the contact page here: http://www.reopenkennedycase.net/contact-page.html

I don't have Gloria's contacts, but if the opportunity arises I'll pass along your enquiry.

However, I'd also be interested in your theory, if you care to pass it along.

Another Socialist crock. Colombia needs freedom which will lead to prosperity. Socialism is a tool to seize power and control the masses.