On a recent evening, a group of young Colombians and a few foreigners met in a restaurant in La Candelaria. 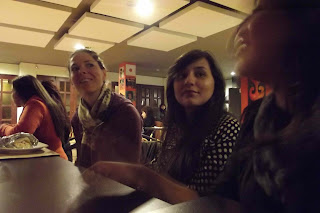 The Colombians spoke varying amounts of English and the foreigners apparently little Spanish. So they had trouble communicating - and that was exactly the point.

This may have been the neighborhood's first language exchange, a simple and entertaining form of second language practice, which also provides cultural exchange and even friendships. 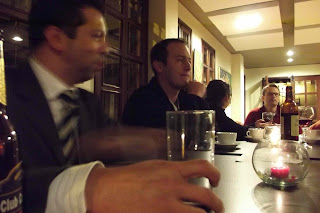 This particular evening, in the Cafe Mestizo on Calle 9 and Carrera 2, attracted a mostly 20 and 30-something crowd. Almost all of the conversation was in English, probably because the gringos' Spanish was too rudimentary to assemble much more than a sentence. But the English speakers seemed satisfied to learn a bit about Colombian culture, travel and food.

"That's what we need most - the opportunity to practice languages in a non-academic environment," she said.

Linda spoke a basic English, but seemed to lack confidence and conversed mostly in Spanish.

Across the table from her sat Freddy, 40, a local lawyer who wanted to improve his English to travel to Greece and Turkey.

At these events, "I can make dates and contacts for other activities," he explained, adding, "I'm not shy."

Freddy carried on a steady conversation in English with a couple from Vancouver, Canada seated beside him, who spoke almost no Spanish.

"We just needed enough (Spanish) to get by," the Canadian woman explained apologetically.

In fact, you don't need any Spanish at all to get by during a Colombian vacation - as long as you stay in the gringo bubble of hostels, hotels and tourist outings. But then you haven't really gotten to know much of Colombia.

At the other end of the table a young foreign man was entertaining three young Colombian women in English.

Alejandro Blanco, the event's organizer, said he'd considered trying a half hour in English, followed by a half hour in Spanish, but that that system seemed forced.

"It's was better just to let it flow according to the moods of the participants," he said.

This is one of several such language exchange events in Colombia, including one at the National University and Gringo Tuesdays in north Bogotá, which I've heard quickly devolves into a party.