Good luck crossing Carrera Decima when it's busy - whether you're a person or a vehicle.

Private buses stop atop the crosswalk and in the middle of the intersection, blocking the TransMilenio buses.

Bogotá's private buses - old, creaky and polluting - respect neither law nor authority. For them, pedestrians are obstacles and nuisances - unless they're potential passengers and represent pesos.

Bogotá could get its traffic moving significantly faster just by enforcing laws - which I assume exist - against vehicles stopping on crosswalks and in intersections. But the private buses ignore such laws (as well as basic consideration). Don't even think about pollution limits. 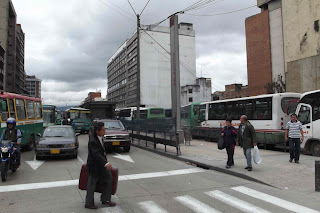 They sometimes have police on the North and South sides of this corner.

I'd say Decima and Jimenez is slowest AT NIGHT.