Beginning of the End for Plan Colombia? 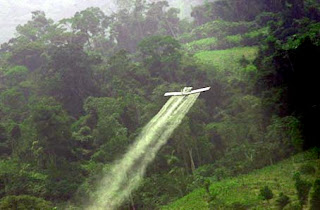 This year Washington is cutting Plan Colombia funding by 15%, to $400 million. That's still a considerable sum - about $10 bucks for each Colombian. The reduction was probably inevitable, considering the U.S.'s budget problems and Washington's near obsession with terrorism, to the exclusion of other problems. Colombia may have more officially-designated terrorists per-capita than any other nation on Earth - but they rarely target Americans, and never on U.S. soil. It's also healthy for Colombians to assume their own security needs.

However, the cut must worry many Colombians, as Plan Colombia has helped bring remarkable changes here since its start in 2000. Before that, Colombia was nearly a failed state, suffering severe violence. Some observers even suggested it might split into three separate countries: one in the south controlled by Marxist guerrillas, the mountainous central region controlled by the government and the coastal region controlled by right-wing paramilitaries. 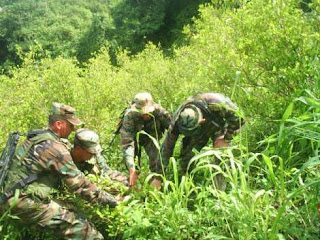 The plan's name and goals were certainly presumptious - just imagine anybody accepting a Washington-designed Plan Ireland or a Plan Italy. Yet, in many ways it's succeeded. A decade later, Colombia is stable, democratic and has a solidly growing economy and a new destination for tourists. The Marxist guerrilla groups, which so long had half the nation under seige, have been driven into remote regions. And both heroin and cocaine production have declined substantially.

The changes have come at a big price in human rights, most notoriously due to the Falsos Positivos scandal, in which military units murdered young men and disguised them as guerrillas, and a continuing flow of peasants driven from their homes. The herbicide spraying and pushing of drug crops into jungles has caused lots of deforestation and water pollution.

But, for the great majority of Colombians, the policy has succeeded and they've looked past the problems. As a result, Colombia was one of the few countries in the world where John McCain was more popular than Barack Obama - because Colombians believed that a Republican administration would bring more U.S. money.

With less U.S. money and military aid, could the guerrillas come clawing and bombing their way back? Only experience will tell for sure, but hopefully Colombia's economy is strong enough, its public institutions honest enough and its police and military sufficiently cleansed of drug corruption to keep up the battle against the guerrillas.

Incidentally, the plan has also meant probably billions of dollars in sales for U.S. military and other contractors, as well as opened huge areas of Colombia to investment by U.S. and other companies which previously had feared violence and extortion by guerrillas.

But, even with big business support, U.S. funding for Colombia has never enjoyed the same political backing as the U.S.'s Cuban policy.

In response, Colombian officials vow they won't let down their guard against rebels and drug traffickers. However, Pres. Juan Manuel Santos recently suggested, uncharacteristically, that he'd be open to drug decriminalization if other nations did the same - a crack in the Washington-backed (imposed?) prohibitionism.

But if Plan Colombia has definitely benefited both Colombia and U.S. business interests, it's questionable how much it's accomplished regionally. While coca leaf and heroin production have been slashed in Colombia, they've shifted to Peru, Bolivia and, in the case of heroin, to Afghanistan. Violence is down in Colombia, but it's up in Mexico and Central America.

If U.S. cocaine use has declined, it's rising in Europe. And some would-be cocaine users may just be shifting to equally destructive artificial drugs, such as methamphetamines.