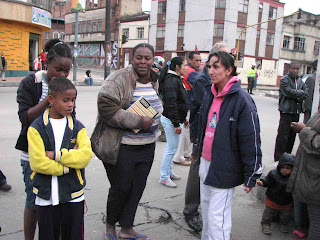 About two years ago, as they tell it, families who had been driven from their farms by illegal armed groups and fled to Bogotá, moved out of a government shelter and into a vacant building in the run-down Santa Fe neighborhood, behind the Central Cemetery and just a few blocks from the red light district.

Colombia has millions of displaced people - mostly peasants who have been driven from their homes by armed groups - and become refugees in their own nation.

About 80 people, including many children, lived in the building, which says 'New Social Era' on its front, belonged to the government's Bienestar Familiar (Family Wellbeing) agency, and worked in informal, low-wage jobs, such as construction and as street vendors.

Almost all of the displaced families had been farmers, and most blamed the right-wing paramilitary groups for driving them from their homes. Many charged that the paramilitaries had attacked them in collaboration with the regular military, in order to hand over their land to powerful corporations. Now, they suspected, the government was evicting them again to clear the way for urban renewal projects. 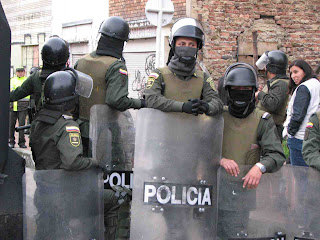 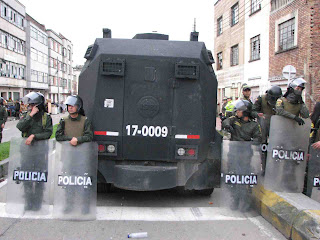 There is in fact a great deal of evidence that the outlawed right-wing paramilitaries have collaborated with the regular military - at least in the past. In recent years, many of the paramilitaries have signed peace deals with the government and disbanded, altho new criminal groups have sprung up in their places. Colombia's military says it's cut ties to the paramilitaries, and in fact many paramilitary leaders are in prison.
Yesterday  morning, riot police and social welfare workers arrived on the street. Witnesses said they used tear gas and physical force to remove the building's occupants.
The displaced people said that the government had offered them a few day's lodging in a shelter, but that they didn't know where they'd go afterwards - perhaps another vacant building.

The Colombian government is developing a Law of Victims and a Land Law, intended to compensate victims of the country's conflict. 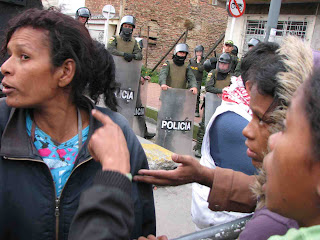 This woman said the police had injured her while dislodging the occupants from the building. 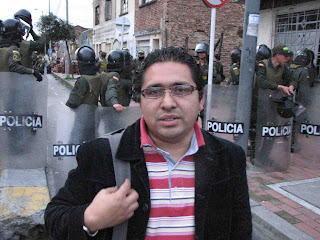 This man, who identified himself as a human rights worker, asked whether children were more important than a building. 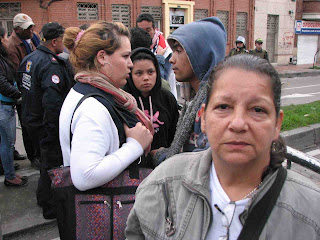 A woman who also identified herself as a human rights worker criticized the United States for funding the Colombian government, which she blamed for the displaced people's plight. Like others, she pointed out that members of illegal guerrilla and paramilitary organizations who demobilize often receive more government benefits than do those victimized by such groups. 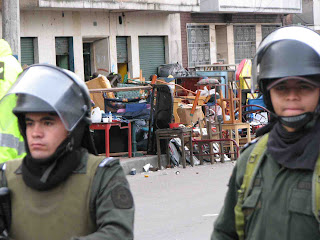 One regular city cop I spoke to sympathized with the displaced people's situation. He said he hoped that the city wasn't emptying the building, 'in order to just leave it sitting there.' The squatters' situation has been a long-running drama. The police told me that they'd first tried to negotiate with the people. 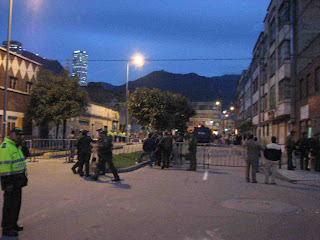 By nightfall, the people were gone. 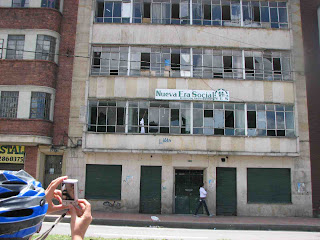 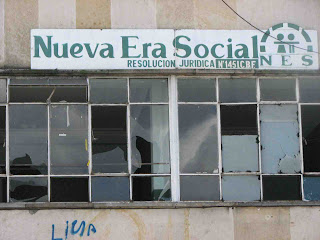 When were the windows broken?
By Mike Ceaser, of Bogotá Bike Tours
Publicado por Miguel en 11:15 AM