Trash Resurrected into Art, by Jesús!

During a bike tour, we met Jesús in the National Park, where he was showing off the sculpture of Bob Marley he'd made out of objects salvaged from the trash. 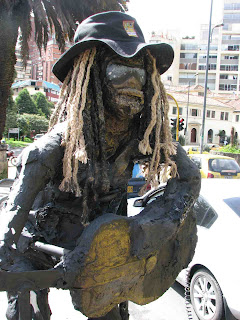 Jesús told us he'd made about 40 such works over the past several years, including Michael Jackson, Policarpa (a Colombian independence heroine, who is on the 10,000 peso note) and vehicles, including even tanks. He's an ingenious guy - and determined, too. He said that each work took a month or two to finish.

Besides accepting contributions in the street from folks like us, Jesús also sells his sculptures - for about 350,000 pesos each, or almost $200. That seems like a lot for folk art in Colombia. But perhaps he quoted a sum he considered a start for bargaining.