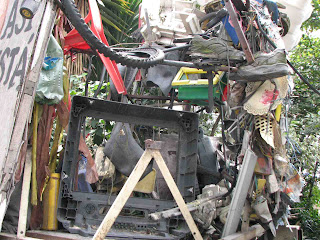 Undoubtedly, many people have visited museums only to declare the art 'garbage.' But Bogotá actually has a garbage museum.

Today I tried to visit the museum, in a comfortable-appearing corner house in the middle class La Soledad neighborhood, just a couple of blocks from the City Council building and the National University. You can't miss it, with its suspended tangle of old shoes, toys, a discarded television case and other found objects. Is this folk art, or trash someone neglected to discard?

I knocked on the wooden door, which had an illegible sign hung on it with letters made of trash, and alongside, where others might have hung ferns, old shoes and used styrofoam packaging. A light was on inside, and a young woman look out at me, but nobody answered the door.

A quick look shows that the place is making a statement. The sign on the corner says 'The world is like this,' while the one under the eaves is more pointed: 'Museum of the hidden work of man and woman.' The neighbors give it a shorter name, however: 'The Garbage Museum.' 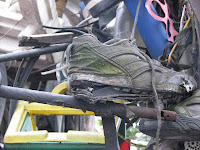 Two teenage boys stopped in front of the house. Did they know the homeowner? I asked them. Yes, they'd met him, they said. The garbage museum was more than ten years old and the house's interior contained more trash. The owner smoked pot, they helpfully informed me. Did I smoke pot? No, I told them. They seemed to lose interest. They weren't looking for folk art, I guessed. They walked on. 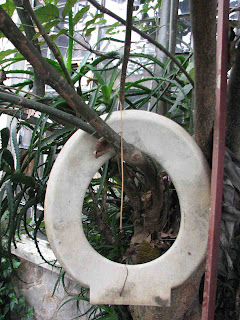 A woman stopped on the corner and said she was a friend of the homeowner, Antonio Zea, a painter who worked only in black and red. His museum's purpose, she explained, is to force people to confront the trash they produce, rather than hiding it away. But I couldn't meet the artist now, she said. He'd been up late last night and wouldn't awake for another three hours. It was three in the afternoon. Such is the artist's life, I guess. 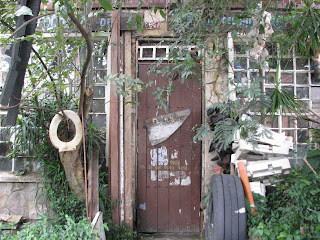 Zea's point is well-taken. However, in Bogotá trash is not exactly out of sight:
By Mike Ceaser, of Bogotá Bike Tours
Publicado por Miguel en 6:06 PM