Emberas in Bogotá: End of the Road? 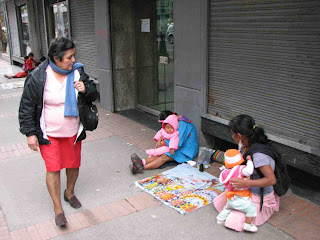 Recently, it seems to me that more and more indigenous Embera people have been appearing on Bogotá sidewalks, where they generally sell small handicraft works.

The Emberas, small farmers who live in western Colombia as well as parts of Ecuador, Costa Rica and Panama, have been in the news recently for the wrong reasons: They've been driven off their lands by drug bands, guerrillas and paramilitary groups.

I spoke to two young Embera women who, with their infants, were selling woven wristbands and other handicrafts on the Seventh St. sidewalk. To me, their situation seemed tragic, but they said they were happy in Bogotá - altho their limited Spanish made me wonder how well we were communicating.

Here's an El Tiempo article about Spanish classes for Emberas in Bogotá. I was surprised to see they're not encouraging them to return to their communities.

But how happy can the Emberas be having traded their lives in the jungle for crowded and bare rented rooms in Bogotá's violent, drug-saturated San Bernardino neighborhood? Am I romanticizing the Emberas' traditional lifestyle by saying that quiet, fresh air and clean water are better for them than Bogotá's chaos, noise and pollution? Is it presumptious and selfish of me to say that they're better off lacking TV and Internet, where their children are unlikely to find much education? 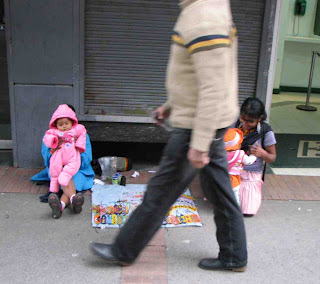 Certainly, indigenous people have the same rights as anybody else to pursue the advantages of civilization. But this isn't the way to do this. The young Embera women, who looked like teenagers but said they were 18 and 25, are losing their culture and family structures. Both said that the fathers of their infant daughters' had left them for other women. One told me that her father had been murdered by guerrillas. The babies were munching on packaged junk food, perhaps given to them by well-meaning passerby. But processed foods are bad for all of us. And these children, used to fresh fruits, vegetables and meats and lots of exercise, are going to be sickened by these foods and likely to become obese and diabetic. I see lots of young indigenous people in Bogotá, often studying in universities. But the great chasm between a simple farming/hunter-gatherer existence and city life is too great, and I'm afraid that these people are doomed to ill health and to fall prey to exploitation by criminals.

In Bolivia I visited a slum occupied by indigenous people who until a few decades before had been hunter-gatherers living in isolated bands. Then came a war, railroads, alchohol and missionaries who took away their traditional owl worship and taught them to pray to Jesus. The people I met were formally Christians, but they lived in miserable shantytowns of tin and cardboard and survived off of prostitution and theft.