Our Victory Over Crime! The Police Museum

Here's a decked-out Harley Davidson motorcycle complete with gold parts siezed from a narcotrafficker. And an arsenal of guns capable of fitting out a SWAT team. And most of all there's a plaster cocaine king Pablo Escobar: dead and under glass, in a tiny prison cell, on the wall with a reward on his head.

At the Police Museum, on Calle 9 between Carreras 9 and 10, we saw all sorts of artifacts of Colombia's war on the drug cartels, ranging from the scary, such as a guerrilla missile launcher, to the impressive, like the part-gold Harley, to the outright gruesome: photos of a dead and bloody Escobar and other drug kings.

The museum, one of many museums in La Candelaria, has free admission and our guide, Juan Pablo, spoke a rough but effective English. The tour began mundanely with the police's old horse-drawn mobile prison car. (Things have changed little: you still see the prison cars, now diesel powered, picking up drunks and rowdies for a night's stay in the drunk tank.)

I mentioned to him that we were interested in Pablo Escobar, who became one of the world's richest men by exporting Colombian cocaine, and generated a decade of bombings, murders and kidnappings in Colombia. I'm sure I wasn't the first person who'd asked Juan Pablo about Escobar, whose story brought the Colombian police their greatest tragedies and best-known triumph. Escobar paid hit men $1,000 for each cop they killed and car-bombed the secret police headquarters in Bogotá, but was finally hunted down on a Medellin rooftop by a Colombian team backed by U.S. technology.

"This is a museum about the Colombian police, not about Pablo Escobar," Juan Pablo pointed out to me with forced patience.

Certainly, the museum is about lots more than just Escobar. Besides lots of police memorabilia and trivia (the Colombian police uniform was modeled after that of the Canadian Mounties), there's also tragedy. Young Colombian men are required to do either police or military service. But it's also legal to pay to not do it, meaning that it's poor kids who risk their lives in the barrios and jungles. Unlike other nations' police forces, Colombian cops also play military roles, fighting guerrillas, drug gangs and paramilitary forces. The museum includes a display about a 2010 guerrilla attack in Caqueta, in which 14 police officers were killed and seven wounded. Guerrillas attack Colombian police with a deadly regularity. 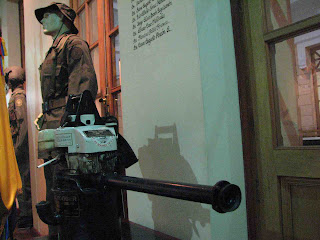 Colombia's police also have to take on almost unique duties, such as erradicating illegal drug crops, as part of the U.S.-financed Plan Colombia, which exposes them to guerrilla sharpshooters and landmines.

In 2010, more than 174 Colombian police were killed on duty. That's more than in the U.S., even tho the States has almost ten times the population.

We weren't disappointed, however. The museum's lower floor is dedicated to Escobar and his generation of cartel killers and traffickers. Escobar headed the Medellin cartel, which fought against the police and the equally violent Cali cartel. The room is decorated with police photos of dead narcos.

"Crime does not pay," Juan Pablo emphasized. True enough - at least after you get caught. Escobar became one of the world's richest men, lived a life of luxury playing with models and sports cars, acquired football teams and even bought his way into Congress. And in contrast to the tiny cell he's displayed in, when Escobar finally agreed to be imprisoned, it was only in a luxury prison called La Catedral, which he designed and built himself. And how about the ones smart enough to get out before getting caught?

Besides the wanted posters, Escobar in a coffin-like glass case, the photos of the bloodied, swollen and disfigured Escobar cadaver, there's also memorabilia: a tile from the roof on which Escobar was gunned down; Escobar's guns, including a tiny one which Juan Pablo said Escobar carried around "like his wife," and a cassete tape of the telephone conversation which gave Escobar's location away to police. (You can't listen to it, however.)

Surprisingly, tho, I didn't see the famous photo of the obese Escobar cadaver on the rooftop, with the gunmen kneeling about him like heroic big-game hunters.

Asked what happened to Escobar's cartel, Juan Pablo said it had been eliminated. Today, the big cartels "are all gone," he said. "There are only little ones left."

In reality, the victory over crime hasn't been quite so complete. Colombia's cocaine production has declined, but it's still the world's leading producer. And, while the big cartels have been smashed, their place has been taken up by guerrillas and paramilitaries with political pretentions and smaller, less flamboyant traffickers. Much of the Escobar-style violence has now shifted to Mexico.

The museum shows that the police are keeping their attitude positive. A slogan says: 'To be happy for a day, get drunk; to be happy for a year, get married; to be happy for life, become a police officer.' Maybe true for cops in Sweden, but not likely in Colombia, with a homicide rate still an astounding 2.5 times that of Mexico.

In my personal interactions with the police I've generally found them to be concerned and competent, and never been asked for a bribe - altho I have heard stories. On the other hand, when it comes to catching the bad guys, they're not always so effective - one reason why Bogotanos sometimes take 'justice' into their own hands.