A Miniature San Agustin in Bogotá Can't go visit the dramatic, mysterious San Agustin statues in Huila Department? Now you can see them in Bogotá's Los Martires neighborhood, but you might want to get down on your knees so that they appear to have their original dimensions.

The thirty-odd statues are the winners of a contest held by the local city hall. Some are much smaller copies of or inspired by the statues of San Agustin, which were created by an unknown civilization before 800 a.d. Others are modeled after the statues at Tierra Adentro, and still others are sorts of modern art.

They're in a tiny neighborhood park, behind a mini police station, in a gritty industrial neighborhood near the Central Cemetery, a mile or so from the Red Light District.

The real San Agustin monuments were built by a civilization between the time of Christ and about 700 A.D. The civilization later disappeared, and researchers have made little headway in understanding who they were or what the monuments represent. Many are by tombs or on hilltops.

See kids leaping off of the monuments. 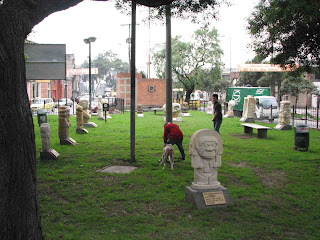 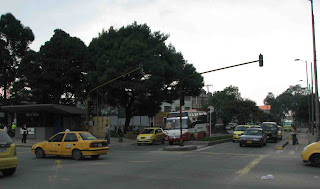 The small park, adjoining a min-police station, is in a very un-Agustinlike setting. 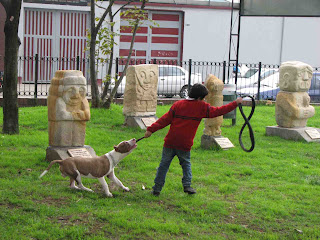 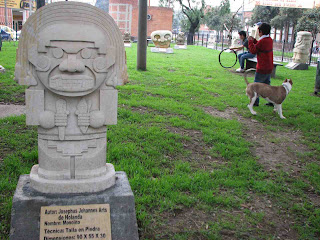 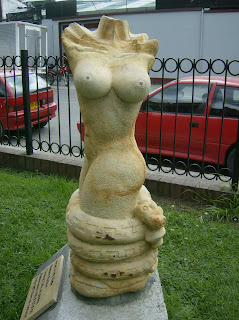 This Muisca indigenous goddess Bachué, carved in a not-so-indigenous style. 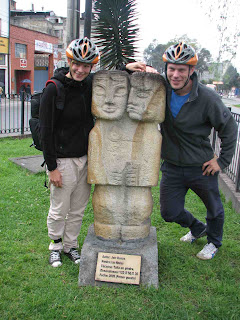 Hi Mike. Is this in El Barrio Santafe? around calle 24?? I want to go but not sure where it is exactly.

I'm not sure the exact street number, but it's right behind Parque del Renacimiento, alongside the Cicloruta that runs behind the Central Cemetery. There's a CAI (police station) in the park's entrance. You could also use Cafe de la Fonda www.cafedelafonda.com , as a reference. It's just one block west and across the street.