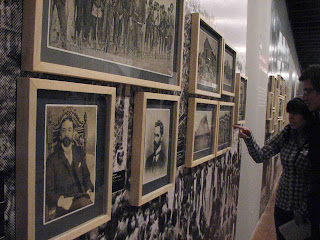 La Casa de Moneda Museum, the Botero Museum's lesser-known neighbor, has a temporary exhibition of Colombian photography. These aren't artsy photos, and, as far as I could tell, the photographers never became famous.

These are documentary photos, capturing significant events and chapters in Colombian history. Sadly, but unsurprisingly, many of the themes are violent: Colombia has experienced some five civil wars, as well as intense political violence, huge riots and the armed insurgencies and drug violence which continue today. 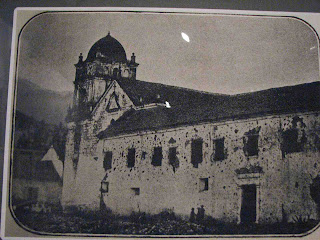 Bogotá's San Agustin Church, across the street from the presidential palace, victim of violence.

The collection also looks at other aspects of Colombianness. Religious figures, in a very Catholic nation, child laborers in a poor country with historically few protections, a bullfight, a riverboat, dignified señoras from an era when a wealthy woman's role was to be decorous and little more. 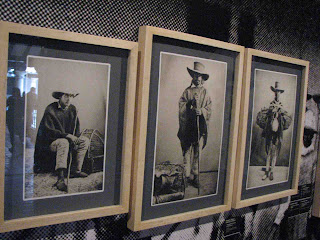 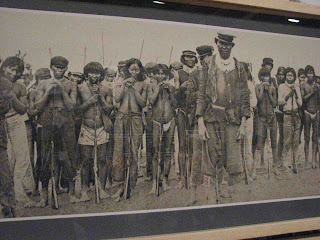 Porters hired by English explorer Thomas Whiffen in the Putumayo region in 1908. 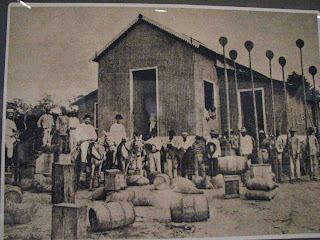 Workers at a rubber plantation in the early 1900s, where men and women, particularly indigenous people, were enslaved and  worked to death. The exploitation in the rubber, or caucho, plantations, were described in a famous Colombian novel, La Vorágine. 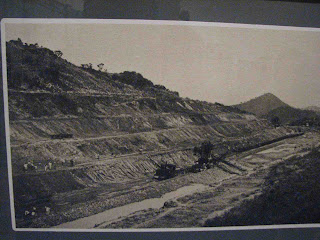 A canal cut by the French, when Panama still belonged to Colombia. The French eventually gave up and U.S. Pres. Teddy Roosevelt helped Panama become independent, and then dug an American canal. How might Colombia's place in the world economy  be different today if the French had succeeded and Panama remained a Colombian province? 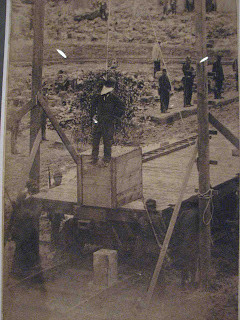 Pedro Prestán, hung in 1885, after leading an unsuccessful rebellion in Panama. The display offered no information about Prestán, but this book tells his story. 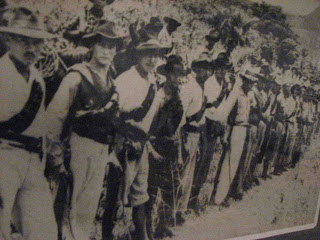 A guerrilla band, in the 1950s, the time when the FARC and ELN guerrilla groups were born. 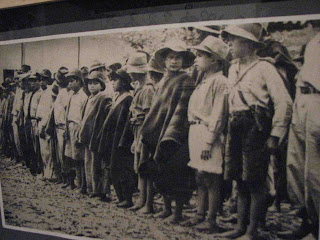 Child guerrillas in ranks in the 1950s. 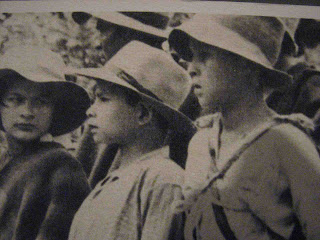 How old - or young - are these child guerrillas? Today, the guerrillas and paramilitaries continue using child soldiers. 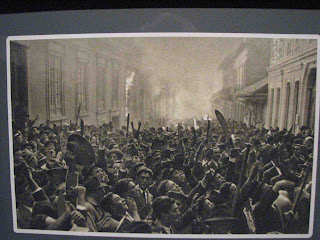 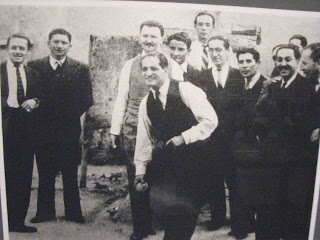 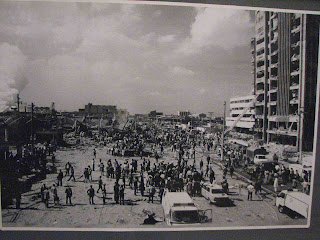 The DAS, or secret police headquarters, in Bogotá after being car bombed by cocaine king Pablo Escobar in 1989. 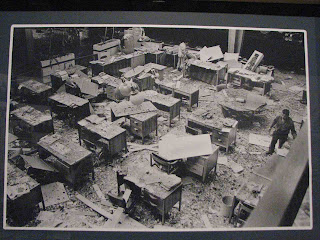 The El Espectador newspaper office in 1989, after being car bombed by Escobar. The office was located in La Candelaria and gave its name to La Plaza del Periodista (Journalists' Plaza). 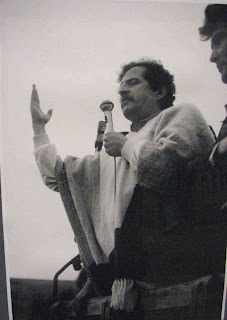 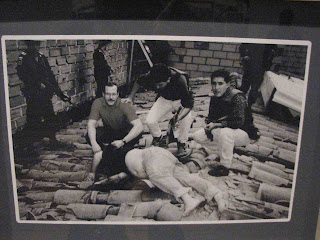 One of the most famous scenes in Colombian history. Escobar dead on a Medellin rooftop. 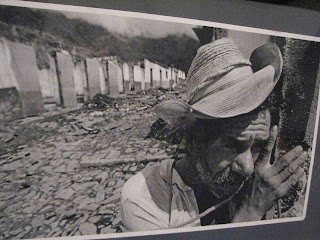 A man returns to the town of El Aro, Antioquia, attacked by paramilitary fighters in 1997. Some paramilitary leaders later alleged that then Antioquia Governor Alvaro Uribe, who later became president of Colombia, gave support to the paramilitaries. 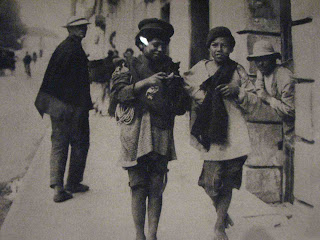 Street urchins - change their clothes, and they could be walking Bogotá's streets today. 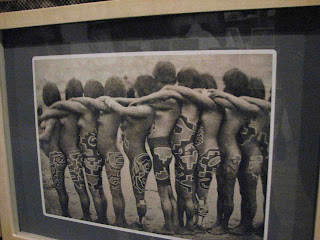 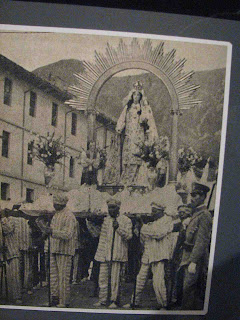 Prisoners carrying the virgin in a parade. 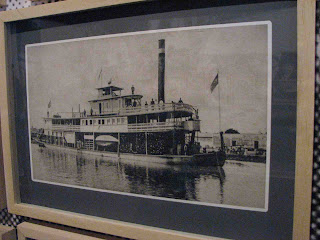 A riverboat, which might have sailed out of a Gabriel Garcia Marquez novel. 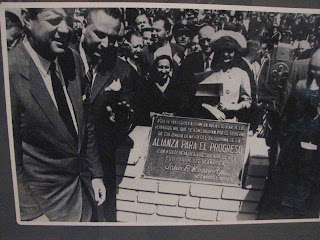 U.S. Pres. John F. Kennedy during a visit to South Bogotá inaugurating new homes as part of the Alliance for Progress program. The Catholic Kennedy was hugely popular in Latin America. After his assassination, a South Bogotá neighborhood was named for him. 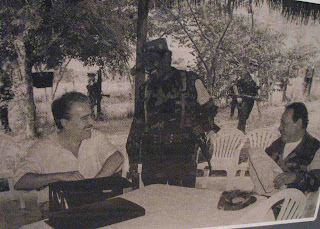 The exhibit could use more explanation - who, for example, was Pedro Preston, whose 1885 hanging is in three different photos? Even Google came up empty for me. Same thing with several of the photographers. I was left wondering whether they were Colombians or foreigners, for example.

Other photo subjects, such as politicians Gaitan and Galan, Manuel Marulanda and Pablo Escobar, are famous, of course. Even so, for those unfamiliar with Colombian history, particularly tourists, background information would be useful.

And, the exhibition does slight the positive - where are Gabriel Garcia Marquez, and Shakira, and Colombian football stars? How about the renaissance of Colombia's cities? Its flower industry?

I'm not completely sure but I think that the picture you explain as "A man returns to the town of Armero destroyed by the Nevado del Ruiz volcano in 1985" is actually about a man returning home after "la masacre de El Aro" which is something completely different.

Thanks for your comment I recall checking this a couple of times, so I think it is correct. But I'll try to check it one more time.

You're right and I was wrong. I made the change. However, the museum also erroneously said the massacre happened in 2007, instead of 1997. - Mike

Great post. The name is misspelled, it's "Pedro Prestán"
http://books.google.com/books?id=_QL3XopuPhMC&dq=%22pedro+prest%C3%A1n%22&source=gbs_navlinks_s

Thanks, I made the correction. Sounds like Prestán was quite an individual. Ironic that Panama got its independence not so long after, but in a totally different way.

I enjoyed your site, its photographs and information. I came across it while looking for information on the treatment of the indians at the hands of the early rubber plantations. I appreciate the work you've invested here. Thanks.

I enjoyed your site, its photographs and information. I came across it while looking for information on the treatment of the indians at the hands of the early rubber plantations. I appreciate the work you've invested here. Thanks.