March of the Milk Makers

Today, milk producers and sellers marched and pedaled in protest against a free trade agreement and laws prohibiting the sale of raw milk.

Campesino farmers throughout Latin America have protested against free trade agreements, which they say open their markets to unfair competition from subsidized foreign products. Colombia recently signed a free trade agreement with the E.U., where many nations, like the U.S., subsidize their farmers, (although the E.U. promises to phase out the subsidies). Rich nation farmers also use more sophisticated farming methods and generally farm on a larger scale, reducing costs. On the other hand, Colombian farmers have happily exported milk to Venezuela.

The farmers also protested against proposed laws prohibiting the sale of raw milk, which may contain dangerous microbes , but which others claim brings health benefits. Some Bogotanos, mostly in poor neighborhoods, call raw milk 'real, real milk' and swear by it. But government inspectors have found that much raw milk doesn't meet health standards. The raw milk industry employs hundreds of people in Bogotá. The raw milkers won their battle, as the government backed off of its prohibition plans.

Colombia's conservative governments have eagerly pursued free trade agreements. A FTA with the U.S. has sat mired in the U.S.'s Congress for years because of concerns of U.S. unions, environmentalists, human rights activists and others. The delay has created tensions between the two governments. 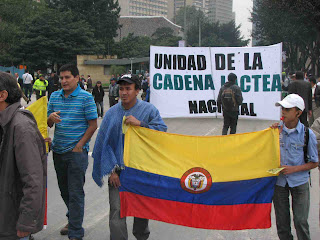