150 Years of the National University 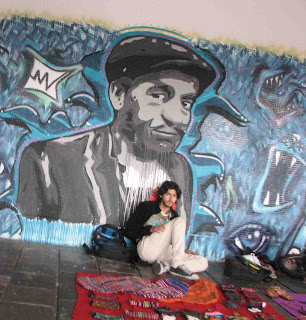 Take a walk across the campus of the National University, and you'll feel like you're anywhere but conservative, militarized Bogotá. The National University, in Teusaquillo, is an island of radicalism, political and otherwise. A huge campus, formally called the 'University City,' but known affectionally as La Nacho, the National University has a special 'autonomous,' legal status, which means that police can't enter campus and the university can make its own laws - or enforce no laws at all, as is often the case. Note the smell of ganja on the quad. And the guys selling square yards of pirated CDs.

This year, La Nacho's School of Engineering is celebrating its 150th anniversary, and several other university anniversaries are coming up over the next years. Congress created it in 1867.
La Nacho is famous for radical political activism and equally radical and colorful graffiti - much of it anti-government and pro-guerrilla. The 'University City' name is appropriate for at least two reasons: the 121-hectare campus is almost as big as a city, and the campus almost looks like a city, with its street vendors, protestors and cultural events.

The graffiti changes steadily as artists add to it, university workers paint over walls and artists add new murals.

Whether despite or thanks to the political fervor, La Nacho is a good university. And it's subsidized, so that the poorer the student, the less he or she pays in tuition. People I know who've taught at both La Nacho and private universities say La Nacho students are more questioning and intellectually inquisitive.
Cuban/Argentinan revolutionary Che Guevara, one of the university's icons, did visit La Nacho, during his motorcycle trip. However, he did not like Colombia, which was then ruled by a right-wing government, and left immediately for Venezuela.
Two of the most famous people associated with the National University were Camilo Torres, a Catholic priest who founded La Nacho's sociology department. An idealist and leader of the Liberation Theology movement, in 1966 Torres joined the ELN guerrillas and was killed in his first battle, making him a martyr for Colombia's left. Antanas Mockus, the university's rector from 1991-93, later became Mayor of Bogotá and ran several times for president of Colombia.