More from Wikileaks - Colonialism or cooperation? 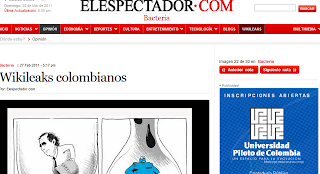 Many Colombians do, of course, feel embarrased and disappointed by recent relevations of the closeness - some would say abjectness - with which their leaders worked with the U.S. Embassy:

And then there was Gen. Oscar Naranjo, head of the National Police, going to Ambassador Brownfield and telling him suspicions that high government officials were directing illegal wiretaps by the DAS. Why does that remind me of one schoolkid tattling on another to the principle, or rival siblings appealing to daddy for support? Naranjo may have been correct, but the U.S. Ambassador wasn't the man to deal with the issue.

The Colombian government so lacked confidence in its own institutions that officials asked for the FBI's help in investigating the wiretapping scandal.

I suppose that things like this are probably the inevitable result of a very unequal power relationship between two nations, as well as Colombia's still frail government institutions. To the U.S.'s credit, it seems that the ambassador was wary of inserting himself into Colombia's internal affairs, and did urge investigations into alleged human rights abuses.

In fact, the U.S. even deflected Colombian suggestions that a war was brewing with neighbor Venezuela. Other cables have revealed Uribe's paranoia about Venezuelan Pres. Chavez, whom Uribe even compared to Hitler. Chavez has never hidden his own paranoid ideas about a U.S./Colombian conspiracy to invade his country.

Colombia's dependance on the U.S. suggests that's it's good that the country's becoming more independent. Hopefully, it's own institutions will continue maturing and its internal checks and balances will work, eliminating any reason to go running to the U.S. ambassador.

That is, if the whole Wikileaks affaire hasn't already scared Colombian leaders away from La Embajada.

Wikileaks founder Julian Assange has also claimed that the U.S. aid for Colombia is motivated by a desire to finance U.S. corporations. Really, Julian? Anybody who's ever paid attention to Washington knows this isn't news. But the issue of motivations is really separate from that of results, and Plan Colombia has helped Colombia. The question is whether or not it'll last.

It's a shame that someone as tainted and dubious as Mr Julian Assange feels they represent good in some sense. And it's even more of a shame that people get suckered believing he is somehow freeing the world and the (illiterate) masses. This is the person that can't speak up against serious allegations from Scandinavia. His name is tainted and so has been his mission. He's nothing but a pawn, now being played by a minor state (Ecuador) with it's own serious issues.