Today AfroColombians celebrated the 160th anniversary of the pohibition of slavery in Colombia, in 1851.


People of African descent make up about ten percent of Colombia's population, most of them concentrated along the Pacific and Carribean coasts. Many highly Afro regions are very poor, particularly El Chocó, which has become allegorical for poverty.
The fact that Colombia waited decades after independence to abolish slavery suggests that Colombia's revolutionaries were not all that revolutionary in eliminating forms of colonial exploitation when they benefited themselves. (And, slavery persisted for years more, in at least some forms, long after legal emancipation. In his autobiography, Gabriel Garcia Marquez writes that around 1900 his family 'purchased' a Wayuu Indian woman to work in their home.)

Colombia never imposed racial segregation. However, prejudice does exist, and I've heard reports of black people being barred from elite dancing clubs in Bogotá and other cities. I've also heard 'culturalism,' which can be difficult to distinguish from racism. For example, people make comments like 'Those guys on the coast don't like to work and have lots of women.' (Of course, the heat and humidity on the coast could drain the energy from anybody.)

Despite poverty and discrimination, AfroColombians have contributed greatly to Colombian culture both as a people and thru extraordinary individuals. One of the best-known living AfroColombians is Raúl Cuero, a microbiology researcher with NASA. 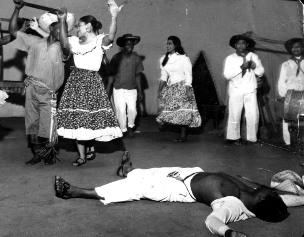 Another is Delia Zapata, who worked to find the African roots of AfroColombian dances. She lived in the Bogotá's La Candelaria neighborhood, where her old home is still a dance studio/school.

On Sunday the 22nd AfroColombian and indigenous groups marched down Bogotá's Seventh Ave. 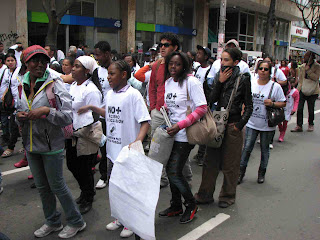 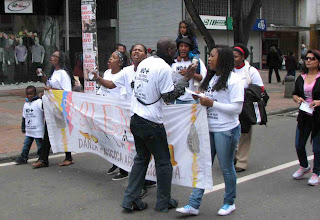 I just wrote a blog post on my sentimental favorite salsero Jairo Varela of Grupo Niche.

I understand Niche is a world they call black people in Colombia, For exemple, I heard an Afro-Colombian singer shout, “Oye Niche,” during a performance. Could you help me out and better understand the meaning of that word?

As far as I know, that's it - it's slang for black. There's of course a 'Grupo Niche' salsa band.

Here they answer your Q:
http://www.radioelsalsero.com/2011/01/jairo-varela-no-me-gusta-escuchar.html

Thanks for the response. I just wrote a blog post on the leader of Grupo Niche over the weekend;

it was started by two niches :-)