I was surprised yesterday when I opened the El Espectador newspaper and saw a full-page ad featuring the gorgeous Kate Moss in all her beauty.

Nothing unusual about a beautiful model selling clothing, furniture and Falabella's other offerings - except that Moss has a history here: she was criticized by Colombia's then-Vice Pres. Francisco Santos after someone photographed her apparently snorting coke at a ritzy party. 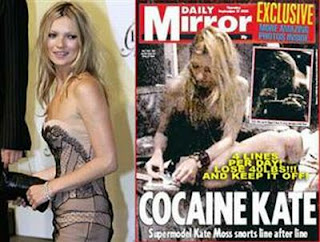 "In Colombia, policemen, judges, journalists, common men and women are dying every day because of cocaine consumption," Santos was quoted in the Telegraph newspaper. "And I never once heard her say, 'I'm sorry'."

Moss did later acknowledge having a drug problem and checked into a detox clinic.

Santos might also have mentioned the deforestation and other environmental damage caused by coca leaf cultivation and cocaine production.

Colombia even launched a P.R. campaign called 'Shared Responsibility' to shame wealthy partyers out of consuming cocaine. It hasn't worked. European cocaine consumption has continued rising, particularly in the U.K., and the campaign's website is gone.

Cocaine finances lots of viciousness in Colombia, including guerrilla, paramilitary and drug smuggling outfits which commit mass murders, plant land mines, drive peasants out of their homes and lots of other crimes. And anybody who uses cocaine, either in Colombia or overseas, should be aware of this.

Of course, these impacts would be reduced dramatically if only cocaine were decriminalized, as it probably should be. However, as long as cocaine remains illegal, it'll keep causing lots of damage and suffering.

A speech in 2007 by Antonio Maria Costa, director of the U.N. Office for Drugs and Crime:

"Nobody makes movies about blood coke. Worse than that: models and socialites who wouldn't dare to wear a tiger fur coat, show no qualms about flaunting their cocaine use in public." -