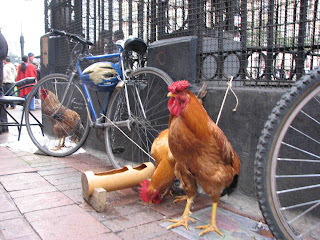 Yesterday, I encountered these three poor roosters tied up on the sidewalk at Jimenez Ave. and Seventh Ave., amidst the noise, bustle and emerald traders of the city center. 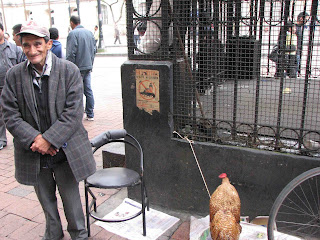 The owner, seated nearby, told me that the animals were being raffled off. Chances cost 3,000 pesos and each rooster was worth 60,000, the man, who looked like a peasant, said. Seems sad for the birds - but only because we're seeing them on the street. In fact, these pollos campesinos most likely had fine lives running about the farmhouse pecking at insects.

And, it's not even certain that they were headed straight to the cooking pot. Lots of people in Bogotá keep chicken in their homes. You often hear the roosters crowing in the most unlikely locales, such as very industrial neighborhoods. My landlords have two young chickens and as soon as they mature we're going to introduce them to another neighbor's rooster.