Lorenzo the 'llama' of San Victorino

Lorenzo's one of the denizens of San Victorino Plaza, where his owner shows him off to kids, families and the occasional tourist. Lorenzo's not really a llama - he's half alpaca and half vicuña. There are no native Colombian camelids, so he's not Colombian-born, either, but an immigrant from Peru.

Lorenzo knows me, but I suspect that he doesn't really love me - just wants the corn kernels I usually give him. Lorenzo chomps them up with his disarrayed teeth. He also laps up coffee. 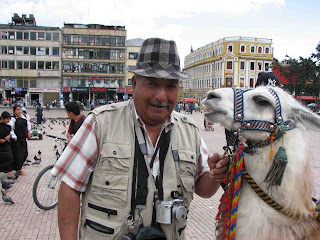 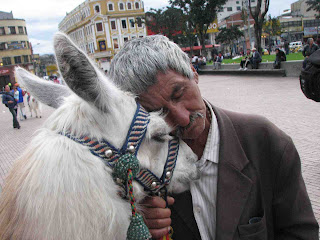 The popularity of getting photographed with and riding camelids (the group which includes llamas, alpacas and vicuñas) has produced a population explosion in central Bogotá.
By Mike Ceaser, of Bogotá Bike Tours
Publicado por Miguel en 7:18 PM