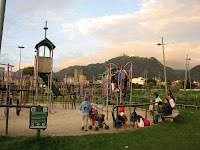 Tercer Milenio is one of Bogotá's newest parks, and on a sunny day it may be the city's most dramatic. The area was once the El Cartucho neighborhood, notorious for drugs, prostitution and other crime. In 2004-5 the city bulldozed the area and turned it into a park. (The residents were driven out like rats, I've been told). Many of the ex-Cartucho residents moved into neighboring blocks, which are violent and dangerous. Best known is the street called 'El Bronx', located on the other side of Martyrs' Plaza.

Today, on a sunny Sunday Tercer Milenio Park fills with people from the surrounding poor neighborhoods, who have few other recreational opportunities and may not be able to afford bus fare to one of the city's larger parks. Tercer Milenio also has a dramatic view of Bogotá's Eastern Hills, including Monserrate, the Virgin of Guadalupe, and the neighborhoods climbing up the hillsides below them. 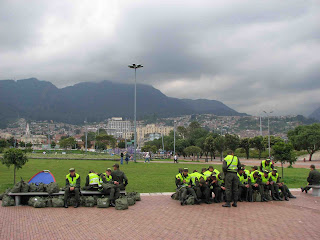 In 2002, the FARC guerrillas hid homemade bombs in El Cartucho and launched the bombs at the presidential palace just a few blocks away while Pres. Alvaro Uribe was being inaugurated. But the bombs are notoriously innacurate. One fell on a poor hillside neighborhood. A second burned the wall of the presidential palace. And a third landed in El Cartucho, killing poor people. That undoubtedly accelerated the plans to level the neighborhood. 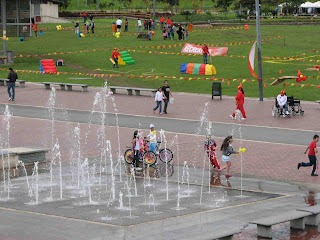