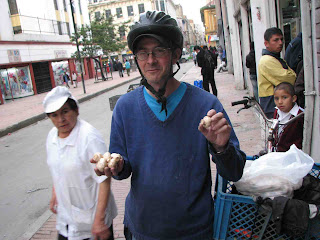 If you've eaten mushrooms in central Bogotá, there's a good chance that you can thank Andrés.

You've probably seen him, but didn't pay attention. After all, he's not very glamorous, pedaling his beat-up bike in the sun and rain. But he's a fundamental force for all those who like their mushrooms fresh.

For the past 15 years, Andrés has delivered the mushrooms his brother grows on his farm in Chia, north of Bogotá. Andrés picks the mushrooms up in the Paloquemao market and guesstimates that he rides some 50 kilometers per day, carrying loads of as much as 50 kilograms, fighting his way thru the city's horrendous trancones. I've spotted him in La Candelaria and by the National University - and I'm sure he goes much further. Whether it's sunny or rainy, and even when he's sick, he sticks to it. After all, he's got a wife and three kids to support. 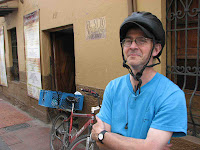 And Andrés has competition: Zeta mushroom company, which delivers by truck.

But Andrés prefers the freedom of his bike. "I can stop wherever I want, I can go thru traffic, I don't get stuck in traffic jams."

Andrés also charges less and gives more personalized service. When a restaurant calls him at 7 or 8 p.m., desperate for 'shrooms, Andrés does his best to deliver. 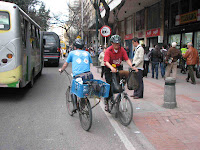 He hasn't switched to a motorcycle, in part because he doesn't want to pollute. And pedaling keeps him trim. Andrés, who earned a college degree in business management, used to manage a relatives typography business.

He's also happier now, because "I like the freedom."

However, bicycle delivery in Bogotá does have its hazards. Andrés has suffered falls, tho never a serious accident. And he's had two bicycles stolen.

"I came back and they weren't there," he recalls.

Still, he doesn't use a lock, altho he is thinking about buying one.