The other shoe dropped today as Bogotá Mayor Samuel Moreno was suspended from office because of allegations of corruption and mismanagement in public works projects. The mayor's younger brother Ivan, a senator, was arrested the other day because of the same scandal, so the two might soon be repeating those great days of childhood by sharing a bedroom.

And yesterday authorities arrested many government officials for an alleged corruption scheme in public health services - functionaries created bills for non-existed services and pocketed the money.

The bad part is that officials are committing fraud, believing that they can get away with it. The positive part is that some of them are actually getting caught.

Mayor Moreno was unapologetic. In a speech today he boasted about his administration's accomplishments. Certainly, Moreno's carried forward public works which needed to be done - but they should have been done cleanly and efficiently. 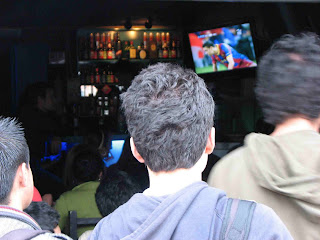 Despite everything, this was the scene this afternoon near the National University. Evidently, Bogotá's young male population prioritized other interests, like the Real Madrid-Barcelona game.

It reminded me of my first crazy days in Caracas, Venezuela, when I was working as a journalist. I'd moved to the city just two few weeks before, had a malfunctioning laptop, no home internet connection and no friends in the city when a coup overthrew President Hugo Chavez.

Most of the city went into lockdown and I raced about desperately in search of an open internet cafe from which to file the biggest stories of my journalistic career. Finally, I found one and began typing furiously while on the television on the wall the coup leaders, a group of business and military men, were announcing the country's fate. Meanwhile, all around me, kids, oblivious and uninterested in their nation's fate, were playing video games and sending text messages.

An employee tapped my shoulder. "Would you mind changing machines?" he asked me. "Then you can continue chatting."

After about 48 hours, the coup fell apart and Chavez was swept back into power generating about 72 hours of frantic journalism. On the third day, I was back in the internet cafe racing against deadline to file another story when an employee tapped me on the shoulder again. "I have to ask you to leave," he said sternly.

I hadn't bathed in four days, and was driving out their game-playing customers. Fortunately, I found a less sensitive internet place across the street.